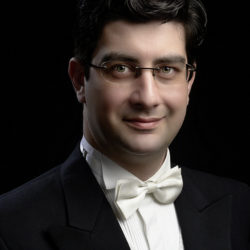 Marek Štilec, conductor
was born into a Prague musical family on 18 July, 1985. After studying the violin at Prague Conservatoryin the violin class of Dana Vlachová, he became a student of conducting at the Prague Academy of Performing Arts, where his professors were Oliver Dohnányi and Leoš Svárovský.

In March 2010 he was invited by Michael Tilson Thomas to study under the auspices of the San Francisco Symphony. In January 2014 conducted New World Symphony under mentorship of Michael Tilson Thomas. He has attended several masterclasses, including those of Jac van Steen in Belfast (Emerging conductors series) Vladimir Kiradijev in Reichenau, Jorma Panula in Weimar, Achim Holub in Graz and London, Gerd Albrecht in Ahrenshoop, and a Leonid Grin masterclass at the Neeme Järvi Winter Academy. He was assistant to Ch. Zimmerman with the Prague Symphony Orchestra in a project featuring Thomas Hampson. As a respected Czech conductor, he has signed an 8-album contract with NAXOS to record the complete orchestral works of Zdeněk Fibich with the Czech National Symphony Orchestra. The project was first launched in February 2012. He has made recordings for Czech Radio and Czech Television and has recorded three albums on the ArcoDiva label and another album on the Radioservis label with Czech Radio Symphony Orchestra. He has also been recording for Digital Records (Italy). His recordings are broadcast by Czech Radio, BBC and EBU. Marek Štilec made his conducting debut at the age of 18 in a concert broadcast live by Czech Radio. Since then he has worked with professional orchestras, e.g. Prague Radio Symphony OrchestraPrague PhilharmoniaPrague Symphony Orchestra FOK (Prager Symphoniker) and orchestras abroad. He has collaborated with professional choirs, including: Prague Philharmonic Choir, Czech Philharmonic Choir Brno, Prague Chamber Choir. Marek Štilec has also conducted a number of operas, including Delibes’s Lakmé, Donizetti’s Viva la Mamma, Martinů’s The Marriage and The Comedy on the Bridge, and Pergolesi’s La serva padrona.