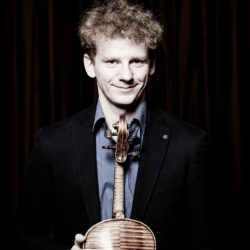 This master class takes place as a joint course with the lecturers Veit Hertenstein and Peijun Xu.

German violist Veit Hertenstein plays with “admirable precision, dedication and strong musical expression“ (Augsburger Allgemeine 2013) as well as “maturity, technique, thoughtful musicianship, and a tone of dark honey” (The Boston Musical Intelligencer 2013). Mr. Hertenstein is Professor for Viola at the Musikhochschule Detmold, Germany and at the Royal Northern College of Music in Manchester, England. Furthermore he founded the Orion String Trio. Lecturer of a master class at the Allegro Vivo Summer Academy together with his wife Peijun Xu.

Mr. Hertenstein has been invited to the Marlboro Music Festival, the Seiji Ozawa International Music Academy, the Viola Space Festival Tokyo, Menuhin Festival in Gstaad and the Verbier Festival, where he was awarded the “Henri Louis de la Grange” viola prize. He has also been several times invited to the La Folle Journée Festival in Nantes and Tokyo. As a chamber Musician he collaborated with Trio Wanderer, Modigliani and Ysaye Quartets, Brigitte Engerer, Valentin Erben (Alban Berg String Quartet), Nobuko Imai and with Midori.

In the United States Mr. Hertenstein performed in concert halls such as The Merkin Hall, New York, The Kenendy Center in Washington D.C. after winning First prize as well as eight performance prizes in the Young Concert Artists International Auditions 2011 in New York City.

Born in Augsburg, Germany, Mr. Hertenstein began studying the violin and piano at the age of 5 and switched to the viola when he was 15. In 2009 he graduated with distinction from the Haute Ecole de Musique in Geneva, where he worked with violist Nobuko Imai. He also has been artistically influenced by György Kurtag, Krzysztof Penderecki, Gabor Takács-Nagy, Yuri Bashmet and Kim Kashkashian. 2011 until 2017 Mr. Hertenstein was the principal violist in the Basel Symphony Orchestra in Switzerland.