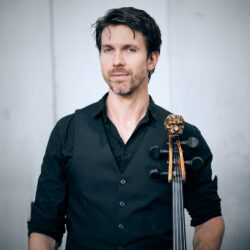 Matthias Bartolomey was born in 1985 in Vienna, Austria. He started to play the cello at the age of seven and took his first cello lessons with his father Franz Bartolomey. He became a student of Prof. Valentin Erben at the University for music and performing arts in Vienna in 1995. From 2007 he studied with Prof. Clemens Hagen at the Mozarteum in Salzburg where in 2010 he completed his studies with a Masters-degree. Since October 2020 Matthias has been teaching as a Univ. Prof. at the Mozarteum Salzburg.

Since 2017 Matthias is focusing on wirting new and original music for cello with an emphasis ondeveloping and advancing new playing techniques. In 2012 together with the Jazzviolinist and Mandolaplayer Klemens Bittmann he formed the Duo BartolomeyBittmann – progressive strings vienna which has become the main focus in his musical career. With exclusively original compositions they are leading their instruments out of their deeply rooted classical tradition to new musical pathways. With the spontaneity and improvisation of Jazz, the music includes heavy groove and rockelements as well as intimate ballads and fast uptempo compositions.

Numerous concerts tours brought the duo to venues like the Berliner Philharmonie, the Elphilharmonie Hamburg, the Muziekgebouw Amsterdam, the golden hall of the Musikverein Vienna as well as many famous festivals all over Europe. In 2019 BartolomeyBittmann released their 3rd studio album Dynamo with the label ACT Music. In 2014 her recorded the rarley played Cello sonata by Sir André Previn with the pianist Clemens Zeilinger. The record was released at the label ARS Produktion.

Since 2010 he plays as solocellist with the Concentus Musicus Wien founded by Nikolaus Harnoncourt. Amongs his regular chamber music partners are Benjamin Schmid, Helmut Deutsch, Clemens Zeilinger, Matthias Schorn, Magda Amara, Georg Breinschmid, Florian Willeitner and the Signum Saxophone Quartet. As a soloist in particular he played with the Wiener Kammerorchester, the Wiener Kammerphilharmonie, the Symphony in C Philadelphia, the Istanbul Devlent Senfoni Orkestarsi and the Symphony Orchestra of the Mozarteum University.

He is prize winner of the Austrian youth competition „Prima la musica“, the competition „Musica Juventutis“ by the Wiener Konzerthaus and winner of the 2nd prize at the International Brahms competition in Pörtschach 2006. In 2009 he received the „Erich Schenk-Preis“ for young musicians by the Mozartgemeinde Wien. In 2018 he received the 2nd prize with his Duo BartolomeyBittmann at the “BMW Welt Jazz ward” in Munich. Matthias is playing a cello by David Tecchler (Rome, 1727) and is exclusively playing strings by LARSEN STRINGS.