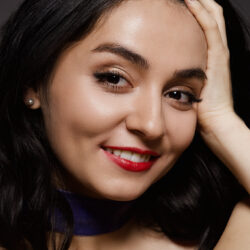 Described as a “Golden-Toned” (Classical Source) and “Stratospheric Coloratura” (The Guardian), Ilona Revolskaya is an artist who “manages to combine acting with supple vocals, dynamically balanced and rich in nuances” (Wiener Zeitung).​

Ilona Revolskaya was born in Stavropolsky Krai, Russia. She debuted in the role of Adele (Die Fledermaus) at Ekaterinburg’s Theatre of Musical Comedy, and later sang Nero (L’incoronazione di Poppea) at the Woodhouse Opera Festival in the UK, as well as Agilea (Teseo), and Oriana (Amadigi di Gaula), at London Handel Festival. From 2016-2018 she was studying at the Royal Academy of Music Opera Course, singing roles such as Morgana (Alcina) and Zerlina (Don Giovanni), to a great acclaim. She also sung Controller (Flight) at the opening of the RAM’s new Susie Sainsbury Theatre.

From the season 2020/21, Ilona Revolskaya is a member of ensemble at Landestheater Linz, where she sung Giulietta (I Capuleti e i Montecchi), Eudoxie (La Juive), and Armida (Rinaldo). She has returned to Theater an der Wien to sing Thalie (Platée), and is also appearing at the Great Hall of Musikverein Vienna, during the New Year concerts series with Tonkünstler Symphony Orchestra.