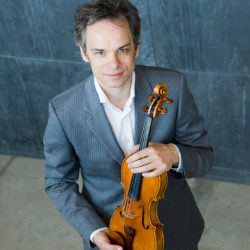 Soloist with the Vienna Philharmonic, Philharmonia Orchestra London, Concertgebouw Orchestra Amsterdam and Tonhalle Orchestra Zurich. About 50 CD recordings; received awards: the German Record Critics’ Award, Echo Klassik Award and the Grammophone Editor’s Choice and in 2006 the International Award for Arts and Culture by the city of Salzburg. Regularly TV appearances with the Vienna Philharmonic. His repertory ranges from standard repertory to violin concerts of Hartmann, Gulda, Korngold, Muthspiel, Szymanowski and Weill. Jazz improvisation. In 1992 prizewinner of Carl-Flesch-Competition and the Mozart-, Beethoven and Audience Award in London. Portrayed as one of the most important violinists
in the “Great violinists in the 20th century”.