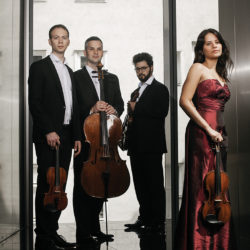 Winner of the Eugéne Ysaÿe competition in Liége, Belgium and currently as “Auner Quartet – The award winning string quartet: a perfect musical match” first Austrian ensemble on the cover of the Performing Arts Yearbook of Europe, the Vienna based string quartet has firmly established itself in the international world of classical music. Appointed by Austria’s Ministry of Foreign Affairs as cultural ambassadors for the 2020/21 season, the quartet now regularly performs as part of the NASOM series in cultural forums and embassies worldwide. Praised for its “stylistic confidence and true emotion … for all four, chamber music seems to be the essence of music per se …” (Radio Ö1, “Intrada”), the ensemble demonstrates “refinement and prowess to both new and established repertoire”. Following an old Viennese tradition of salon concerts, the group holds a special residence in Vienna, performing regularly in e.g. the Brahms Saal of the Vienna Musikverein, the Schubert Saal of the Vienna Konzerthaus, the Arnold Schönberg Centre, the Baroque Hall of the Vienna City Hall and the Ehrbar Hall. As passionate chamber musicians the quartet strives to not only explore the extensive repertoire, but also to present their unique rhetorical voice within the music. As the chamber music studies with Prof. Johannes Meissl (Artis Quartett) at the University of Music and Performing Arts in Vienna focus strongly on the mastery of the “Wiener Klang” (the famous Viennese Sound), as well as a sophisticated interpretation of works from the Viennese “Classical” period; his students Barbara, Nikita Konstantin and Daniel went as individual musicians through one concerted training. Bringing their musical patrimony and individual emotional approach from Austria, Brazil, Russia and Belarus into this musical melting pot but sharing the same educational background, the artists use their different cultural heritage and consider it as their vocation to convey music as a spontaneous and original experience. Artistic impulses from e.g. Hatto Beyerle and Günter Pichler (Alban Berg Quartett) and Petr Prause (Talich Quartet), Alasdair Tait (Belcea Quartet), Geoffrey Nuttall and Lesley Robertson (St. Lawrence String Quartet, USA) complete their qualification. The Auner Quartet is a selected member of ECMA, the European Chamber Music Academy.

As strong advocates for outreach events and educational workshops, the Auner Quartett is actively searching to engage various communities in diverse ways. Member of the “Rhapsody in School” program founded by German pianist Lars Vogt, the quartet holds workshops in schools, making the often first approach to classical music for listeners a single-entry. In a time of shrinking audiences, the group considers it a duty to personally address new listeners. Social work, often in collaboration with the Austrian Ministry for Foreign Affairs, included masterclasses and performances for numerous youth music programs in Peru, Brazil, Belize and South Africa.

The Album with Simon Reitmaier on the Clarinet – featuring Clarinet Quintets by Mozart, Reger and Leitner has been highly appraised by its critics and has been released on the “Gramola” Label in February 2018. A portrait of the chamber music works by Johanna Doderer had be released on the “Capriccio” Label in 2019 and a new recording with string quartets from Egon Wellesz, Alexander von Zemlinsky and Anton von Webern will be released in spring 2021. The Auner Quartett is a partner of the Viennese string manufacturer Thomastik Infeld, working closely on improvements of their outstanding products. Daniel plays on “Elia”, a violin by Giovanni Battista Guadagnini and the violist Nikita on an instrument by Giovanni Paolo Maggini, two generous loans from the collection of precious instruments of the Austrian National Bank.