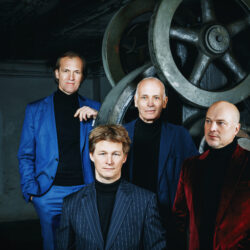 A basic principle is to find arrangements together, to shape them again and again, to play with them and to process the music without fear of the finality of the original. Until she becomes Amarcord. That means: unrestrained playfulness stands before fidelity to the work paired with the typical amarcord sound, absolutely transparent, hopelessly playful and improvisationally random, everything based on the highest technical perfection, which is second to none. Since it was founded in 2000, the ensemble has succeeded in creating a brand that delights audiences all over the world. Her CD’s have been awarded the “Pasticciopreis” and the “Dobbiaco record price”. Her music was part of the signature on Bayern 4 Klassik for several years and the conductor Franz Welser Möst wrote: “Today we talk about new ways in concert life so often: here is a great example that there are no limits to the imagination. Committed to the classical virtues, these artists find paths at the highest level of performance that have not yet been trodden. “